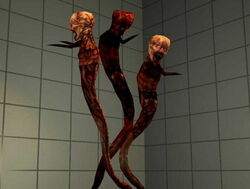 Daemites are enemies in BloodRayne.

Pure Daemites are parasitic/predatory demons that were awakened by the Nazis as they were searching for Beliar's skull. Despite having vestigial limbs and essentially being floating serpents with fleshy heads, they are capable of standing up the entire length of their narrow bodies, making it difficult to hit them with bullets, but are only affected by heavy guns. Daemites will usually bust out from small dark place by surprise and in groups, lashing out with their tails. They can easily be killed with one or two slashes from Rayne's blades. While they lay on the floor dying, they will writhe and spasm on the floor, which can force player's attention to them to see if they truly are dead, taking attention off other Daemites, giving them a chance get back up to attack or escape. The only way to assure that they are dead is to use Aura Sense or see if a puddle of blood pools beneath them.

Parasitic Daemites, according to Dr. Báthory Mengele - who appears to be mainly in charge of the Daemite research - force themselves into the body of the host, pushing their tails directly into the spinal column and tapping into the host's nervous system. They release digestive enzymes from their skin that eat the brain, to control the host like a puppet, and reproduce asexually in the chest cavity, although this is rarely seen in-game. They are hard to kill. They take more damage than a Nazi (human) and aren't afraid to fight to the death, as opposed to a Nazi retreating when his health is low (running off, calling for backup). Even when Rayne hacks off the limbs, the Daemite can still fight, as their body resides in the torso. Feeding doesn't kill it, as it only kills the body of the host, leaving Rayne to fight the Pure Daemite.

The Daemite Warriors bear little resemblance to a Pure Daemite with exception to their three heads, three tails, functional arms, and bigger size. Nothing is revealed about them, but they are possibly the guardians of the lesser Daemites and guard the entrance to the temple that holds Beliar's skull. They are very hard to kill, especially when they are in groups. They deal severe damage to Rayne but move slowly, and can take a lot of damage in return. They can be killed easily during Blood Rage - as opposed to using regular melee attacks - and with heavy guns or explosives.

Retrieved from "https://bloodrayne.fandom.com/wiki/Daemites?oldid=8497"
Community content is available under CC-BY-SA unless otherwise noted.