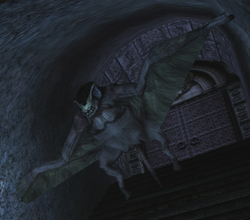 Giants Bats are a species of large bat creatures who lived in Castle Gaustadt.

Nothing is known about the origin of these creatures. Given the fact that they accompany Hedrox's Feral Vampires in their search for Beliar's heart in Castle Gaustadt. They have inhabited the area of the Castle since as long Count Voicu has ruled it.

Giant Bats, as the name indicates, are nothing more than big, man-sized creatures, resembling bats of an unknown species. Their heads are skull-like, with visible long fangs, giving them (as well as their resemblance of bats) somewhat vampiric appearance.

Despite the fact, that they often appear in groups of two or three, and that they move quite fast, they are barely a danger due to their poor resistance to attack, which makes them easy to kill with mere melee attacks - using firearms on them is just a waste of ammo, unless Rayne is surrounded by a group of these creatures. Moreover, their only attack (hitting Rayne with both wings from above) causes little damage and is performed with very low frequency. All this makes Giant Bats more of a nuissance, than a real adversary.

Retrieved from "https://bloodrayne.fandom.com/wiki/Giant_Bat?oldid=8336"
Community content is available under CC-BY-SA unless otherwise noted.