Start a Wiki
A Vampire is a preternatural predator which subsists on blood. Vampires are central creatures in the BloodRayne series, as the heroine Rayne is a dhampir - the crossbred progeny of a vampire and a human - who's spent her adult life hunting vampires in search of her father, Kagan.

The common member of the brood appears human. They only show their monstrous nature when aroused by hunger or intense emotion such as fear or rage. Their inhuman visage exhibits a more pronounced brow and skull structure to their face with grayish skin, yellowing eyes, and fangs.

The vampires of BloodRayne share the basic attributes of their fictional counterparts; superhuman strength as well as a deadly aversion to sunlight. Their hunger for blood - human, animal, or even vampire - is their only nutritional requirement; healing their wounds as they feed. As a play on their inability to cross running water in literature, the vampires of BloodRayne cannot come in contact with any water without being burned as if by a potent corrosive. Due to this weakness, they must avoid any rainfalls or large water bodies and bathe only in blood.

Despite their resilience to most injuries as well as a total immunity to disease, vampires can still be slain by severe physical trauma such as impalement or decapitation. Immolation is also just as deadly as sunlight or water. Excessive blood loss can also prove lethal if unfed. Vampires are also shown to be noticeably faster and more lithe than humans. This varies between specimens, likely depending on the purity of their lineage; some such as purebloods being truly superhuman in acrobatics and speed, while others such as minions are only above-average. 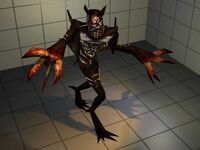 Ephemera
Retrieved from "https://bloodrayne.fandom.com/wiki/Vampire?oldid=7576"
Community content is available under CC-BY-SA unless otherwise noted.